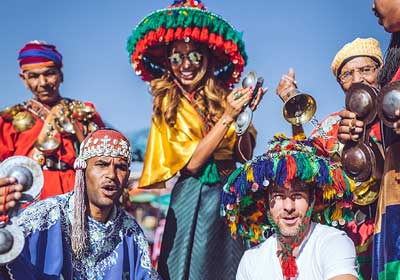 Morocco has been called “home” by many different people throughout the centuries. In addition to the indigenous Amazigh (Berbers), the country has hosted a variety of cultures coming from the East (Phoenicians and Arabs), the South (Sub-Saharan Africans), and the North (Romans and Spanish Andalusians – both Muslim and Jewish) throughout history.

Today, the majority of the population identifies as Berber or Arab and the country’s official language is Arabic. Morocco is a Muslim country, with 99% of its population identifying as Sunni Muslim, but religious minorities are widely respected.

Moroccans are a very welcoming and tolerant people towards different cultures, ideas and ways of life. This doesn’t mean they don’t have strong beliefs and cultural norms – and you should definitely avoid offending those at all costs. Things that may be commonplace in your native culture can be misinterpreted when discussing culture and etiquette in Morocco.

Dress Code For The Traveller

It is insightful to be careful in both dress and conduct to abstain from culpable others. Anyway Morocco knows the estimation of vacationers, who are invited, and remittances are made in the traveler regions and the visitor shorelines. Moroccans themselves are probably going to be substantially more western in dispositions in the urban areas and resorts on the west coast.

The conventional Muslims would not anticipate that a lady should travel alone and surely not to be seen alone after dull. They will accordingly experience issues understanding why outside voyagers may do this and will be suspicious. This may cause a few issues, especially far from the vacationer zones.

Most mosques are typically beyond the field of play to non-Muslims, the special case being the Hassan II Mosque at Casablanca which has guest visits at specific occasions of the day.

At the holy town of Moulay Idriss, non-Muslims are not permitted to remain the night.